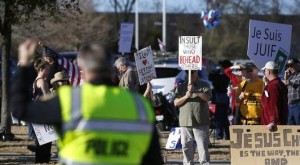 This happened next door to me. I lived in Garland Texas; I served a Christian church there; I sometimes worshiped at the mosque just down the street in the neighboring suburb. This is my community. This is my home. These are my neighbors. This is outrageous.

Then on a recent Thursday, a gathering of Muslim Americans met for the Texas Muslim Capital Day in Austin. Students and children and faith leaders sought to learn more about the democratic process and to meet their representatives. But again – religious extremists interrupted their efforts for peace. As the children stood proudly and began singing the National Anthem, “Christian” protesters – acting in the name of their religion – accused and insulted and disrespected their neighbors.

This is my state. This is my home. These are my neighbors. This is outrageous.

I say this is outrageous.

As an American, I am outraged at the never ending cycles of disrespect that keep occurring in this land that I love: African Americans, Jewish Americans, Japanese Americans, Catholic Americans, Asian Americans, Muslim Americans … the list goes on. Our founding documents articulate ideals of equality, tolerance, unity, harmony, respect, but in all of our history, have we ever lived up to those ideals? Do we even want to?

As a Christian, I am outraged at the never ending cycles of hate masquerading as patriotism. I know many people are very distrustful of the term “Christian;” I get that – especially given these kinds of hateful actions in the name of the faith that I love. In recent years, I have grown very distrustful of the term “patriot” for similar reasons. I want to figure out how to reclaim both these words and reconnect them to their more hopeful (and yes, idealistic) meanings. Both patriotism and Christianity should be bold antonyms to hatred, disrespect and exclusion.

I know some people believe religion is inherently divisive, but I disagree. I believe it is we humans who are divisive, tribal, exclusive of whomever we consider to be “other.” Religion – done rightly – works for justice, peace and reconciliation within the human family. There is nothing inherently “bad” about either religion or patriotism; but there is something deeply “bad” that emerges whenever the two are wed. The terrorist who murdered twelve people in Paris in the name of religion, the KKK that burned “Christian” crosses and hung people from trees, the Nazis who twisted patriotism into a religion of hate, and the current day protesters who use Christ’s name to condemn any of God’s children – these may be degrees on a spectrum but they are all outrageous to me. (To clarify, I am not outraged by protest per se; this too is a constitutional right. I am outraged at the attitudes of hatred that motivate these people to protest. I am outraged at the incivility and disrespect that is so rampant in our American conversation.)

I wrote in an earlier blog about the foundational Christian paradigm of “love of neighbor.” In that essay, I recommend this principle of love as a basic construct for how we live together in society and how we do politics in this nation. For me, as a Christian, this call to love must be concrete and practical and visible. There is another fundamental Christian concept called the Golden Rule: “Do unto others as you would have them do unto you.” Of course both these “rules” for living are not just Christian, both were articulated by the Jewish ancestors of this Judeo-Christian tradition and both are deeply held values within many diverse religious traditions. But surely both these paradigms – love of neighbor and just, equitable treatment others – surely these foundational attitudes should be displayed by all who call themselves “Christian.” Every time people wearing the name of Christ disregard such basic principles and instead practice hate and disrespect, I am outraged.

Abdul Malik Mujahid helped organize the Muslim effort at the Garland Community Center. He said this:

“It is extremely important for the Muslim community to connect with our message. We cannot allow terrorists to run away with the merciful personality of Prophet Muhammad, that they are standing on his name. No. We Muslims in the world, 1.7 billion people, we don’t agree with that. … At the same time, we’re wondering whether there are good neighbors in America who will stand up with people of other faiths for their right to practice their faith.”

As a Christian, as a person of faith, as a pastor, I stand in God’s own over-the-top outrageous love, grace and welcome. How dare I fail to offer love and welcome to any neighbor? 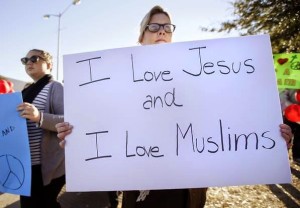 As an American, I stand with Mr. Mujahid, with my Muslim neighbors, and with all people who work for justice, peace and reconciliation. I stand firmly in our American ideals of equality, tolerance, unity, harmony and respect.

Who stands with me?

Charlotte Vaughan Coyle is an ordained minister within the Christian Church (Disciples of Christ). She currently is pursuing a Doctorate of Ministry degree at Brite Divinity School (TCU) in Ft. Worth TX.

One thought on “This is Outrageous: Loving our Muslim Neighbors”