I have written numerous letters to you considering the nature of our shared Christian faith and its appropriate intersection with culture and politics. As one of your constituents and as a minister, I have concerns about the numerous ways you conflate religion and politics and how this confusion contributes to division and animosity within our society. I am especially bothered by your constant rhetoric about “religious liberty.” I believe your approach is wrong-headed. 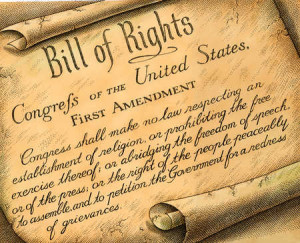 Don’t misunderstand; I am a great supporter of the religious freedom of American citizens. I am ever so grateful for the First Amendment and for our nation’s efforts to abide by the remarkable principle that separates the State and the Church.

However, throughout our actual history, Christianity has enjoyed special privilege in America from its founding to this very day. Maybe not an “establishment” by government but certainly an advantage over other expressions of faith. The obvious result of this cultural advantage is that people of other faiths and people of no faith are often at a disadvantage.

Because I am a Christian, I am concerned about all our fellow citizens – equal not only in the eyes of the Creator but also in the eyes of the law. Since you say you too are a Christian, then it is right for you to treat each person as you would want to be treated. Since you are the elected representative of a wide array of citizens, it is your job to work for liberty and justice for all.

Why aren’t you concerned about the “religious freedom” of every American?

In my opinion, you have made a mountain out of a molehill by claiming that marriage equality threatens some people’s religious freedom.

I ask you: How does acknowledging the freedom of same sex couples to marry have anything at all to do with you and your freedom? I just don’t get it.

The SCOTUS ruling doesn’t require you to change your personal opinion; it doesn’t limit your right to express that opinion. Your tax dollars are not paying for these weddings. I can’t imagine a same sex couple asking you to officiate at their wedding ceremony, but if they did, you could just say “no.”

The SCOTUS ruling doesn’t require a County Clerk or a baker to change their religious beliefs. But the Supreme Court does require all elected officials to abide by the law. It requires merchants who operate within the public sphere to avoid discriminating against their fellow citizens.

Besides, I suspect clerks and bakers do business every day with people they dislike or disapprove of in some way or another. So what? We don’t have to approve of other people in order to treat them with respect and to do our own work with integrity.

Allowing for the greater freedom of our LGBT citizens in no way diminishes the freedom of straight citizens. 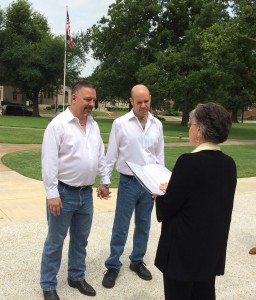 So I just don’t understand: why does the marriage of my precious friends, Scott and Val, have anything whatsoever to do with you and your religious freedom?

Whenever I serve as minister of a local congregation, I must constantly take into consideration the broad range of beliefs inherent within such a diverse group of people. Shepherding, preserving, nurturing, deepening community in the midst of differing opinions is always a challenge but crucial to the work of a pastor.

If I let my personal opinions run rough shod over the concerns of another, I replace love with selfishness. If I allow the personal beliefs of one group to diminish the sincere beliefs of another group, I damage the health and vitality of the whole group. Finding ways to help a community grow together in love and grace in the very midst of its diversity is good and wise pastoral care. It is also good and wise politics.