Growing up in a fundamentalist denomination, I know something about mental gymnastics. The particular issues of my religious upbringing were not so much “issues” as they were life and death. A particular way of believing determined who was faithful and who was not; who was in and who was out. There was a certain comfort in thinking we had most all the big questions settled and we cornered the market on truth.

In order to maintain this illusion, we needed to contort our arguments to explain away any facts or evidence or experience that did not align with our fixed notion of reality. But it wasn’t just a contortion of thinking; it was an unconscious contortion of reality itself. The whole enterprise of keeping our balance on this tightrope required our own unique exercise of mental gymnastics.

This is not justification; it is simply confession. And maybe a bit of explanation. 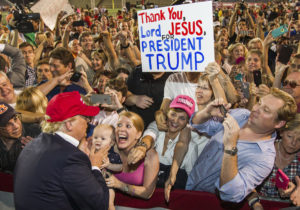 Much has been made of the puzzling Evangelical Christian support of Donald Trump. This poster boy for materialism, narcissism and perversion of power contradicts every heretofore voiced value of any authentic expression of Evangelical Christianity. He even mocks the cornerstone Religious Right  issues of abortion and homosexuality by mouthing transparent platitudes that everyone knows deny and spin his actual positions.

Many pundits have pondered the puzzling irony of Mr. Trump’s Evangelical support. My contribution is hardly definitive but I keep going back to this one insight: we humans have an uncanny ability to convince ourselves that just about anything is true/right/good and we can justify even questionable/shady/convoluted means in order to accomplish our self-righteous, pre-determined end.

I  see too many of my Evangelical friends caught in this trap. I think it explains some of the mental gymnastics we see coming from that camp. Mostly though I’m pondering my own culpability in new  forms of mental gymnastics that twist my interpretation of reality into fresh convolutions. I’m wondering what my journey into painful honesty may have taught me in this odd political/social/cultural season in which I  live.

On the one hand  – the more convoluted the reasoning is, the more likely the logic is actually hopelessly illogical.

But then on the other hand – the more simplistic the reasoning is, the more likely it is that multivalent, multidimensional truth is being contorted into untruth.

As to the first challenge, I recognize my own temptation to create elaborate defenses for whatever  I want to believe. These defense mechanisms can trick us into creating a reality of our own invention. (And I’ve noticed that my Liberal friends can be just as defensive as my Conservative friends.)

The second challenge of simplistic thinking comes because it’s so very tempting to  try to divide our lovely  human rainbow variety into boxes of black and white, good and bad, right and wrong when the truth is – we are  all a messy mix all the time.

This conversation is of particular importance these days because of the bizarre presidency of Donald Trump and the toxic and dangerous passion of his supporters. Too many of them sadly support and cheer him on because of their own xenophobia or misogyny or deep seated anger over some real or perceived wrong. 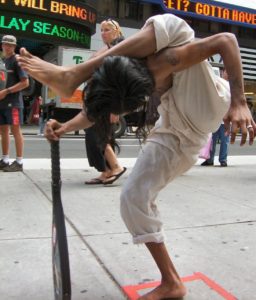 But too many of them support him because of their convoluted mental gymnastics. Trump does not care about protecting the unborn as they pretend to believe he will. He does not care if same gendered people are married. He only cares about himself: his money and his power. And yet too many kind-hearted, sincere believers have allowed themselves to believe he cares about them and their issues.

As a woman, a mother, a grandmother, I denounce the blatant insults Mr. Trump heaps upon other human beings – particularly those who are not male, white, beautiful or wealthy.

As a Christian, I disavow all the insidious mental gymnastics that convolute the truth of the Christ and the Christian faith.

As an American, I challenge any who pretend his leadership will be beneficial for our nation or for the world.

Let’s remember who we are as Americans and reclaim the ideals of welcoming community that is the true foundation of our greatness.  There is a point at which gymnastics becomes a deadly exercise. America has certainly reached that point.

Ravi the Scorpion Mystic stands on one leg performing his act in Times Square, NYC, 2004