On the first day, I was in shock. Not because of the gross error of pundits and polls, but because of my overwhelming confusion that my fellow Americans could possibly have voted in favor of a man who embodies such anti-American attitudes and actions.

On the second day, the reality began to settle in. The classic grief cycle was in full swing and my shock and denial moved to anger.

On the third day, I awoke with a glimmer of hope.

In spite of the election results, the election numbers reminded me that more than half of all American voters voted against Donald Trump. In spite of the increasing stories of violence and intimidation being done in Trump’s name and because of his example, voices of peace spoke out with courage and commitment to stand in the gap for our vulnerable sisters and brothers. 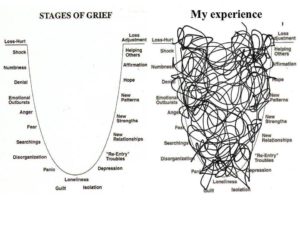 On every day since, I have continued to spiral back and forth between sadness and anger and hope. Such is the nature of the grief cycle; we move through grief in our own time and in our own way, remembering that grief is not a smooth nor an easy path.

In my particular religious tradition, the third day holds a unique and important significance. In Christian theology, the third day speaks of resurrection.

Even if you are not Christian, hang in there with me as I try to make sense of this historical shift in our nation from within this theological framework. I think there is something here that could give us all help and hope.

In the Christian story, Jesus was nailed to a Roman cross in ancient Palestine. In the story, this punishment resulted from the collaboration of the power brokers, status quo keepers and insiders from the religious and political establishment. Jesus was a simple rabbi, a teacher, a pastor who fed the hungry, honored the poor, welcomed the marginalized and spoke of a reality that is larger and realer than any of the political, institutional powers of politics and religion. People flocked to him. And believed him. And thus he became a threat to the entrenched powers-that be. And so he was eliminated.

But the story doesn’t end there. In the Christian story, on the third day, Jesus’ willingness to enter into our human experience of violence, nihilism and death… Jesus’ faithfulness and courage to engage the horror… Jesus’ persistent vision of a human family where all are honored, all are welcomed… Jesus’ dying to himself brought him out on the other side of death. And now resurrection is unleashed within the cosmos. Now Resurrection Hope is everywhere.

Resurrection is a common theme in many of our grand stories. (Even Gandalf and Harry Potter saw their deaths redeemed.) Believing that death is not defeat, that truth is larger than life, that love finally wins is not fairy tale; this is classic Hope that we humans have held on to throughout our history.

But even if we do believe in resurrection, humans continue to encounter violence, intimidation, nihilism and death. In spite of the Christian conviction, we still have to account for this ongoing brokenness of the human family. How do we claim resurrection is real when we also must admit the reality we see in the brokenness of the human condition?

One way to talk about that dual reality is to ponder the Already and the Not Yet.

Because of the Third Day, Creator has already brought unending Life and Love to all creation. We believe this bright goodness is real because we can see it in countless acts of faithfulness, self-sacrifice, compassion and courage. But at the same time, this bright vision of the world is not yet. Powers-that-be continue to promulgate darkness, violence, intimidation and death in their effort to hold on to their perverse power; that also is all too real.

And so our human story continues to tell countless stories of this Both-And struggle between darkness and light, between hate and love, between death and life. And in the very best stories, we come to understand that this battle doesn’t just take place between nations and peoples, but rather the fight is ultimately waged within the human spirit.

But the Hope is also real.

Some of us are learning, like the Dali Lama, that we “must not hate those who do wrong or harmful things; but with compassion, we must do what we can to stop them — for they are harming themselves, as well as those who suffer from their actions.”

Some of us are accepting, like Frodo, that we are called to do what is ours to do, in our time, in our place, each in our own way.

In the Both-And reality of our human condition, some of us – religious and non-religious – still choose to live in Resurrection Hope.

As I watch the unfolding of a Trump administration, I’m still angry. So I will make my donations and write my representatives and march if I must. But I will not give up Hope.

As I listen to the continued stories of violence and brokenness, I’m still angry. So I will speak out to my local and state authorities and I will wear my safety pin and stand in the gap with and for my sisters and brothers. But I will not give up Hope.

As I experience a multitude of emotions triggered by the reality of this Not-Yet world in which we live, I will keep my focus and find my balance and practice compassion. And I will not give up Hope.

But so is the Hope.

(Today is a good day to read again. Dr. Martin Luther King Jr.’s “I Have a Dream” speech.)

And take heart from Gandalf’s wisdom:

3 thoughts on “The Third Day”