I am a White Christian American born and raised. 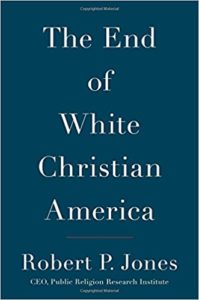 So it’s been an interesting experience to read Robert Jones’ book: The End of White Christian America.

White Christian America is survived by two principal branches of descendants: a mainline Protestant family residing primarily in the Northeast and upper Midwest and an evangelical Protestant family living mostly in the South. Plans for a public memorial service have not been announced.

He then tracks the history of White Christianity in America, from the founding of the nation all the way through the recent election in which 81% of White Evangelicals voted for Donald Trump.

(Black Christian America and Catholic America both have a different story. The work Jones tackles is challenging enough as he unpacks the complicated family tree of us Protestant White folks. But the analysis he offers about White Protestant Christians is important, critical even, in order to understand our current political climate.)

White Christian America was a given at this nation’s founding. Of course there were a handful of Deists among the Founders but almost everyone was some sort of Christian. Some were pious, others were nominal; some were active practitioners while others wore the name simply because of the comfort of its cultural pervasiveness. The culture of the day was White and Protestant. The leaders of the day were Free Male Land Owners.

So the question: “Is America a Christian nation?” never has been an appropriate framing of the situation. Yes – many of the Founders were some sort of Christian and often their thinking and writing reflected that orientation. Yes – America has been majority Christian for its entire lifetime. But No – the First Amendment makes it clear that, even if there is a religious majority within the nation, the federal government is to be neutral, not establishing (nor disestablishing) any particular religion. And Yes – ongoing amendments and common law have unpacked the First Amendment so the Constitution has been evolving across America’s entire lifetime.

The marriage of White Evangelicals to the Republican Party is a fairly recent development. Jones identifies how a “White Christian Strategy” arose out of the “Southern Strategy” of the 1960’s when White Southern Democrats flocked to the GOP in droves because of their disdain for the Civil Rights Movement. Jerry Falwell and the Moral Majority tapped in to this “Great White Shift” and the Christian Right became a political force. In 1976, Falwell’s “I Love America” rallies were filled to overflowing with people who wanted political solutions to their targeted issues of abortion, feminism and homosexuality. Heirs of this religious-political movement continued to gain steam during the 1990’s, but during the 2000’s, there were numerous scandals, stumbles, divisions and declines within White Christian America. This led to the election of President Barack Obama in 2008.

Just a few months into the Obama presidency, however, the Tea Party emerged. There have been numerous explanations for this movement but Robert Jones cites PRRI data that clearly links the Tea Party to the Religious Right. It wasn’t just about taxes and small government like they claimed; rather objections to abortion and gay marriage dominated the Tea Party movement, demonstrating to Jones that the Tea Party was “another revival of White Christian America.”

Robert Jones added a chapter to this book after the 2016 election, analyzing the fact that 81% of White Evangelical Christians voted for Trump. Jones remains convinced that the End of White Christian America really has arrived, and he sees the current situation not as a revival but rather as the last gasps of a growing minority. White Christian America has been in power for 239 years and we should not expect it to go quietly into the night.

White Christian America and the Family

Jones shows how successful the Christian Right was in its early efforts to outlaw gay marriage based on its commitment to “traditional family values.” Numerous states passed laws and even Constitutional amendments that outlawed marriage equality in the years leading up to the 2015 tumultuous Supreme Court decision. Since that ruling, a variety of religious freedom issues continue to arise that demonstrate the ongoing resistance from the Religious Right.

In my opinion, the most powerful chapter in Jones’ book is chapter 5. Race: Desegregating White Christian America. In recent years, when young Black men and women were being killed in epidemic numbers by police officers across the nation, President Obama said: “This has been a slow-rolling crisis. This has been going on for a long time. This is not new, and we shouldn’t pretend that it’s new.”

But for White America, it did feel new. PRRI asked Black and White Americans about their perception of police violence.

“Is this part of a larger pattern or are these isolated incidents?”

The perception gap was huge.

Robert Jones concludes his work with an interesting discussion of the grief process. He says the loss of power, privilege and predominance for White Christian America is evoking the classic stages of grief: Denial. Anger. Bargaining. Depression. And then finally Acceptance.

Jones specifically mentions David Gushee, an Evangelical ethicist, who is nudging conservative Christians to accept the end of White Christian America. But it is an acceptance tinged with hope.

Naming reasons for decline, addressing the causes and finding new pathways forward is the only way through the current dilemma for White Christian America. Gushee is one my recent favorite writers as he seeks to carve out a center space for conversation and collaboration with Non-White, Non-Protestant, Non-Christian America.

Is This Really the End?

Too much of what we see represented as Christianity in this nation is an empty shell, a hollow structure.

As a Christian minister, I believe the Church needs to find its way back to the authentic witness of the Christ whose name we wear. If we don’t live as Christ-people, then we ought to die. As an American, I believe our nation will benefit from a rebirth of Christianity and the transformation of American Christians: White, Black, Brown, Conservative, Mainline, Gay, Straight, Rich, Poor, Republican, Democrat, Independent. 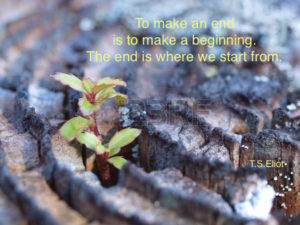 So (as T.S. Elliot said) the end can be the beginning.

13 thoughts on “Is it Really the End of White Christian America?”