The stories keep coming. This politician and that corporate mogul face the accusations of numerous women who say they were touched inappropriately without their consent. This sports star and that news personality face public censure because of sexual harassment or violence against women.

The stories are not new. What IS new is that – finally – the stories evoke outrage in the American conscience.

Surely the women-as-objects paradigm is as old as time. Across the ages, across the globe, social systems evolved based on the premise that “might makes right” and physical strength justifies domination. Women are not the only people to find themselves on the bottom of this perverse hierarchy, but women and children are the most common targets throughout human history. 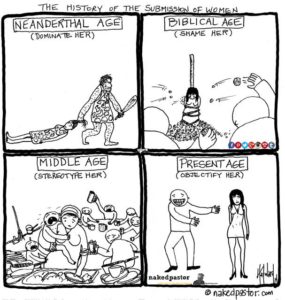 Within my own Christian religious tradition, patriarchy has been the norm. Our own Scriptures offer multitudes of examples of this cultural norm. Not because our religion created male dominance but rather because any religion can incorporate any kind of cultural expectations and baptize them with religious justifications. Even the famous Ten Commandments (of which Roy Moore is so enamored) warn against coveting a man’s wife, slave, ox or anything else that belongs to a neighbor. Women as property.

Slavery, racial superiority, plundering of the earth, violence – all these human ills sometimes become religious tenets that are fortified with religious fervor. Perpetuating such evil in the name of the Creator-of-all-things-good takes God’s name in vain and rightly shames all of us who wear God’s name.

There is another way to read our Christian Scriptures, a way that is much more faithful and authentic. That is: to see in the creation stories an intended cosmic equality between the sexes. And to see in the Cross an antidote and correction to all the inequities humans continue to perpetrate upon one another.

Here is the appropriate Christian response to the rampant disrespect of women that is finally coming out of the shadows and into the light. Not just the disrespect of grabbing body parts or the verbal assaults and dehumanizing boasts or the quid pro quo expectations in the work place, but also the disregard for her voice when a woman finally speaks.

The appropriate Christian response is to stand against disrespect and mistreatment wherever we see it and to stand for truth, no matter how inconvenient that may be. 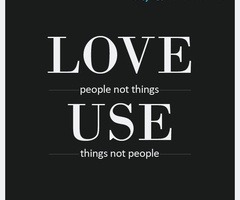 Of course my title is inaccurate: “when women WERE objects” is not yet a factual statement. But the current outcry of the American conscience gives me hope that maybe our cultural expectations are finally shifting towards justice and equity. True partnership between men and women is an untapped resource for our society that can open up eternal springs of energy and creativity.

May America embrace this vision of partnership, equity and justice. And if Christianity refuses to lead the way, may we be dragged, pushed, prodded and shamed into following the lead of our non-religious sisters and brothers who sometimes grasp the meaning of gospel far better then we.

Thanks to the Naked Pastor and his team for the cartoon.

I couldn’t find an attribution for the quote about ‘loving people and using things.’ Several different people have been given credit.

One thought on “When Women Were Objects”