It is a vicious cycle. Not at all neat or logical. We humans can be a complex mess.

Nelson Mandela was honored recently at a 100th birth day celebration in South Africa. Here is someone who taught himself how to break free of the vicious cycle and his life still serves as an example to all of us want to learn a better way.

President Obama spoke at the event in Johannesburg and reminded us what a whole and wholesome human looks like.

In prison, he studied Afrikaans so that he could better understand the people who were jailing him. And when he got out of prison, he extended a hand to those who had jailed him, because he knew that they had to be a part of the democratic South Africa that he wanted to build.

“To make peace with an enemy,” he wrote, “one must work with that enemy, and that enemy becomes one’s partner.”

South Africa’s Truth and Reconciliation Commission shepherded more than 20,000 people through a process of naming the truth about some of the acts of violence perpetrated during apartheid and then forgiving those “enemies.” This is difficult, painful work but it is the only way to move from enemy to neighbor.

Forgiveness (in order to be authentic and healing) must include the acknowledgment of the damage done. Here is the “truth” part. We name the violence, we name the pain; we don’t excuse it or diminish it. Only then can we move on and let the pain go so that we are not shackled to its crippling power any longer.

In the New Testament, Jesus told a parable about what it means to be “neighbor.” It started with a lawyer asking “who is my neighbor” but Jesus turned the question by asking: “who is the neighbor?”

Who in the famous story of the Good Samaritan showed mercy? Who was the one who acted like the neighbor?

Our world desperately needs more neighbors and fewer enemies. If we are to reclaim our humanity – the best of what it means to be human – then some of us must step up and grow up and reach out to our “enemies” with mercy, courage and compassion.

More of us need to redraw the circles of our community to include “others.” 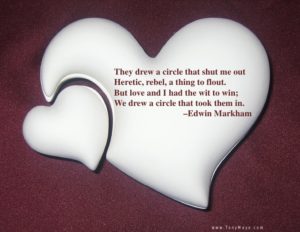 Other colors, other languages, other religions, other customs, other socioeconomic classes, other politics … It’s high time the grown ups start deconstructing our old social constructs and begin to create a new world for our children.

Here. This is our challenge.

Who will be the neighbor?

3 thoughts on “Who is My Neighbor? Who is My Enemy?”