A friend of mine visited Auschwitz a few years ago; they showed us their pictures and shared some of the stories from that evil time. The realities of the Holocaust are chilling, horrific, gut wrenching.

How did people hold on to hope in such a world?

Some of history’s calamities have been conceived and spawned by humanity’s twisted malevolence: massacres and pogroms and persecutions. Sometimes it is the devastations of nature that roar and rage or slowly strangle the life out of entire regions of the earth. Whether natural or man-made, the people who endure such tragedy are changed forever.

How do people hold on to hope in such a world?

Lately I have felt so disheartened by the current events of our own world; I feel powerless and hopeless. I can hardly bear to read the news: horrible stories of war, torture and inhumanity across the globe; depressing stories about the immoral and unethical antics of our elected public “servants;” heart breaking stories about police brutality and America’s entrenched racism; alarming stories about the misuse and neglect of our land and air and water; painful stories about too many of my friends who, every single day of their life, walk an economic tightrope between security and disaster.

How do any of us hold on to hope when everything around us seems completely hopeless?

A few years ago, one of my pastoral counseling professors from seminary wrote an important book about hope. Every now and again, I open this book from Dr. Andrew Lester and re-read it so that I can find my center again. Dr. Lester teaches that lived hope is grounded in reality, is oriented toward possibility and is made possible within community.

Hope is deeply connected to

When hope is grounded in reality, our eyes are wide open. Reality allows us to name our situation honestly and to recognize the challenges unambiguously. Hope doesn’t see the world through rose-colored-glasses; it is not wishful thinking; it knows how hard this is. But hope also sees a larger reality, a bigger picture than that which is available to our human eyes. Hope counts on this other invisible reality that exists simply because God exists. Even when everything we see and experience appears to be hopeless, hope taps into the other reality of God’s presence in the world, the Creator’s movement in and with creation.

When we learn to see both the visible and the invisible realities, we can look at the facts of our situation and say: “yes – but.” We can look at all the evidence and say: “nevertheless” – something else is true besides our obvious circumstances. We are enabled to see the bigger picture of what God has done and what God is doing in the possibilities of the future. 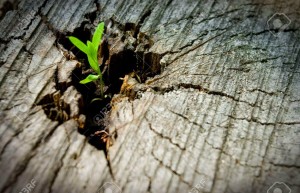 People who live life from faith have always been oriented toward the future. The very definition of “faith” is movement toward something that cannot be seen; stepping out on a path even when we don’t know where it will lead; heading in a direction that may be completely irrational and unreasonable. People of faith can live with this kind of confidence because they are deeply and irrevocably people of hope. The goal, the future, the hope, the impossible possibility: God is forever bringing all things together in wholeness and shalom in spite of what we humans keep doing to ourselves and each other.

There is one final leg in this three-legged stool of hope that Andy Lester talks about:

lived hope is grounded in reality,

is oriented toward future possibility

and is made possible within community.

As a matter of fact, hope cannot be lived in isolation; it is community that creates and nurtures hope.

Madeline L’Engle tells of a time when she held onto life by a thread and could not pray; her community of faith held on to hope for her, she says. Jean Estes experienced the death of her newborn grandson and gives thanks for a community that “held her hope for her” in the days when she could not hold onto hope for herself.

That’s a powerful image: holding on to hope for one another. We are woven together, knit together, connected together in a fabric of humanity, each of us individually a significant part of the whole. All of us together bound up in the mystery of mutuality and community. 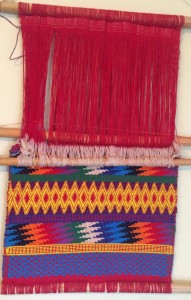 Andy Lester says because of this deep connection there can be a kind of “contagious hope” that wells up within a community; seeds of hope can take root and grow into a lush, fruitful garden of hopeful expectation.

But there is a flip side: there also is an “infectious hopelessness” that can take hold within a community. Sometimes a people will despair over their current circumstances, cannot imagine an alternative, become so fixated by their past that they become closed off to the future. In these dark days, even a few persistent people who keep themselves grounded in the reality of God’s past and present work of faithfulness and who keep themselves oriented to a future with hope can spark a contagious optimism within an entire community.

There is much to be discouraged about in today’s world; I don’t know what will come of our current social, ecological and political situations. Sometimes I feel hopeless and powerless; sometimes the anger wells up and the tears flow; I’m afraid it will get worse before it gets better.

But then again, as I write this during this season of Christmas, I remember that today’s world is really not so different from the world into which the Christ Child was born. We tend to romanticize the baby in the manger and downplay the poverty, oppression, prejudice and danger that permeated the lives of so many people in the 1st century C.E. of the Roman Empire. But the point of the Christmas story is that God-in-Christ chose to enter into the hopelessness of humanity by becoming the incarnation of hope. Ultimately, the love-peace-joy-hope we celebrate during Christmas is the startling and undeserved action of the Divine moving constantly in a dark and broken world.

I love Mary, the mother of Jesus; I love what she symbolizes for me, for us. 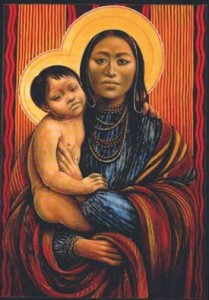 When Mary recognized the movement of the Holy, she risked everything to become a part of the world-changing events that were gestating all around her. She allowed hope to grow within her until she was able to birth infant possibilities, impossible possibilities. In the midst of her own disadvantages – a poor minority woman living in a police state – Mary did what she was able to do, did what she was given to do and opened herself up to a future with hope.

So now, in our own evil time, let the work of Christmas be ours to do every day of the year:

hold on stubbornly to this hope …

each of us individually and all of us together embodying and midwifing God’s impossible possibilities.

I am grateful for the grassroots efforts of Coffee Party USA – opening eyes and helping to do the hard work of bringing people together. I’m proud to be a part.

Madeleine L’Engle writes about her brush with death and long recovery because of a 1991 automobile accident in her book The Rock That is Higher (2002).

Find Jean Estes’ powerful interview in The Work of the People.

4 thoughts on “Holding on to Hope in Such a World”