I’ve been reading Kevin Kruse’s book, One Nation Under God, and I’m intrigued by his analysis of how “corporate America invented Christian America.” Oftentimes our national debate circulates around the Founders and how they understood the relationship of church and state. Even with a fairly adequate historical record available to us, Conservatives and Liberals argue ad nauseam about what the authors of our Constitution and Bill of Rights intended. Kruse also downplays the theory that the Christian revival of the 1950’s was primarily a reaction against Communism. Kruse only nods to these discussions and instead posits an economic domestic agenda: that “a Christian America” was intentionally created in the 1930’s by anti-FDR corporate magnates in league with Evangelical preachers.

Decades before Dwight Eisenhower and his administration instituted the American civil religion mantras of “one nation under God” and “In God We Trust,” Corporate America and Evangelical Christianity began planning for the wedding of religion and politics—a marriage like none other in the history of our nation. In order to counter the New Deal and its challenge to wealthy industrialists, the National Association of Manufacturers (NAM) recruited willing preachers to help spread the gospel of individual prosperity exemplified in the capitalist system of free enterprise.

…Conservative Clergymen used their ministerial authority to argue, quite explicitly, that New Dealers were the ones violating the Ten Commandments. In countless sermons, speeches, and articles…these ministers claimed that the Democratic administration made a “false idol” of the federal government…that it caused Americans to covet what the wealthy possessed and seek to steal it from them…Above all, they insisted that the welfare state was not a means to implement Christ’s teaching about caring for the poor and the needy, but rather a perversion of Christian doctrine. In a forceful rejection of the public service themes of the Social Gospel, they argued that the central tenet of Christianity remained the salvation of the individual (7).

This approach came to be known as “Christian libertarianism.”

To be fair, President Roosevelt was also bold to use biblical arguments and images to further his causes. FDR’s first inaugural speech, Kruse points out, was so laden with references to Scripture that the National Bible Press published an extensive chart linking his text with the Corresponding Biblical Quotations. “In the speech, Roosevelt reassured the nation that ‘the money changers have fled from their high seats in the temple of our civilization. We may now restore the temple to the ancient truths.’” 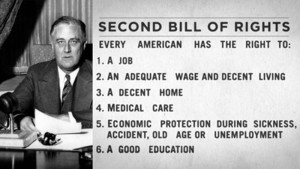 The New Deal itself was grounded in the Social Gospel, a version of Christianity that understood the importance of the public good, of the fundamental significance of “daily bread, shelter and security.” In pulpits across the nation, Liberal preachers championed the New Deal and its welfare state as simply “the Christian thing to do” (5).

The same basic divides exist in America today as have always existed between Conservatives and Liberals, between individualists and communitarians. Is the purpose of a corporation to turn a profit and make its investors wealthy or to produce meaningful services and products in a safe and equitable workplace? Is the job of government to protect individual rights or to serve the common good? Is the goal of religion to accomplish individual salvation or to motivate love and service toward the neighbor? Maybe none of this is either/or. Maybe that’s why this whole issue gets so complicated. Kevin Kruse helps us understand what is happening in our current culture and how we got here.

I’ve written about my personal journey in other blogs: how my move away from Conservative religion led me into a decidedly Liberal social and political worldview. As a Christian pastor, I have a bias toward a Christianity that is rooted in inclusive community and against versions of Christianity that judge who is in and who is out, who is worthy and who is not. As a Christian American, I’m with FDR: “The test of our progress is not whether we add more to the abundance of those who have much; it is whether we provide enough for those who have little.”

Kevin Kruse adds perspective to the historical evolution of the courtship and marriage of religion/business/and/politics that we are now experiencing and he sheds light on why certain issues have become such battlegrounds. Kruse also reminds us that these developments are recent; much of this invention of a “Christian America” has happened in my lifetime.

Kruse knows well the power of religion. Some of my readers wish religion would just go away but that will never happen since religion has been a significant part of the human experience from our earliest beginnings. Religion in and of itself is not the problem; when done right, faith helps people become more aware of self and others and more deeply connected to all creation.

But Kruse’s work gives us clarity about how religion continues to be manipulated for personal, corporate and political gain. 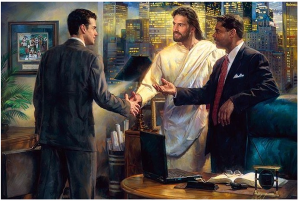 He helps uncover some of the roots of these ill-advised (not to mention illegal) conflations of church and state and how this approach has gained traction in the last few decades. In my opinion, there are many, honest, well meaning Conservatives who continue to be deceived by con artists who are quite good at manipulating religious passion.

“As…religious revival swept through American politics, many in the United States began to believe their government was formally and fundamentally religious. In many ways, they’ve believed it ever since.”

Such insight should give us the ability to challenge some of these perversions of religion and change how its power influences our public policies.

As a Christian and a minister, I highly recommend Kevin Kruse to you. In recent weeks, he has offered interviews and excerpts from his book as articles for our consideration. (One Nation Under God has been very helpful for when I was writing monthly letters to my senator, Ted Cruz. My third letter was exactly about this “fusion and confusion of faith and politics.”)

On March 14, 2015 Kruse published this except from the book in the New York Times: A Christian Nation? Since When?

Then on April 19, Salon published this article that included recent history of the ways Presidents Bush and Obama have incorporated religious language into their own public speech. Christian America is an invention: Big business, right-wing politics and the religious lie that still divides us

Religion Dispatches recently offered this transcript of an interview with Kevin Kruse: The Invention of a Corporate Christian America

Terry Gross interviewed Kruse on NPR’s Fresh Air on March 30: How ‘One Nation’ Didn’t Become ‘Under God’ Until The ’50s Religious Revival

Kevin M. Kruse is a professor of history at Princeton and the author, most recently, of One Nation Under God: How Corporate America Invented Christian America (Basic Books, 2015). 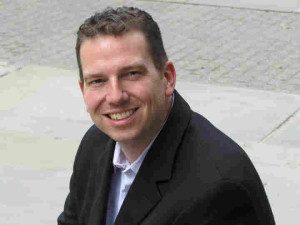 3 thoughts on ““How Corporate America Invented Christian America:” A Reflection”