Numerous people across cyberspace have been positing similarities between Kim Davis and Rosa Parks. Creating this compare and contrast list has been an interesting exercise because I have found many more differences than likenesses. Kim Davis is no Rosa Parks.

I’ve wondered why she won’t resign and let the other clerks in Rowan County do their job. The understanding I have come to is that Davis truly believes her cause is just and her actions are justified. If Davis believes in this cause so much that she would ‘die’ for it, then it’s reasonable she would use whatever power she has to try to influence outcomes. Holding on to the job in order to push the issue makes sense when I see her as a zealot with a cause and a little bit of power.

I’m watching Ken Burns’ documentary on the Civil War on PBS and I’m struck by the comparison. People living in the South truly believed their cause was just and their actions were justified. Their commitment to a cause led to the sundering of America and to the horrific deaths of 2% of the entire population of our nation.

This commitment to a cause continues to influence our social fabric all these years later. Confederate flags still fly above some government buildings. Some school textbooks re-frame the history of the Civil War in order to teach that the cause was just and the actions were justified. The states of the old Confederacy often vote as a block and continue to rally around passionate cries for states rights.

Allegiance to a cause can be a powerful motivator.

Blind allegiance to a cause can be toxic.

Cynics are quick to say Kim Davis is betting on a book deal or some high dollar speaking engagements. Maybe. But I see one unpretentious woman who has found herself thrust into the middle of a national debate that has become ugly and brutal. I see a modest woman with a simple faith who truly believes she is doing God’s will and who believes her eternal salvation is at stake.

Instead of railing against Davis, mocking her education, her marital history, or her speech patterns, perhaps we could do better by redirecting our energies to the folks pulling the strings behind her.

He goes on to name several of the “cultural forces” that manipulate the passion of decent, good-hearted people and use them as props and puppets. 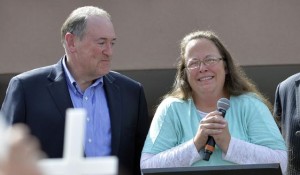 It is not the Kim Davis’ of the world who are the problem, Henson says; it’s the Mike Huckabees and the Ted Cruzs “peddling a tired blend of bigotry dressed up as faith…” It’s the Jerry Falwell-styled lawyers “torturing every religious angle … and pushing their legal agenda to discriminate.”

I agree. If reasonable people are going to nudge this nation toward its ideals of liberty and justice for all, then we need to tone down the rage aimed at all the various Kim Davis’ out there and increase our outrage over the manipulative powers that cast injustice as a just cause. We need to expose and confront the cultural forces that seek to divide and conquer us. We need to push back without becoming like that which we dislike.

One more compare and contrast:

Just in case you want to read David Henson’s blog on Patheos (I recommend it):

Just in case you are inspired to read more about Rosa Parks or listen to an interview:

The History Channel: 10 Things You May Not Know about Rosa Parks

See here the Academy of Achievement website with a video interview with Rosa Parks.

This article has been edited thanks to feedback and comments.