The media stars were gushing. 59 missiles ripped into Syria and the media pronounced the president “presidential.” Praise burbled from both sides of the aisle in spite of the fact that the president scorned Congress’s required consent. The “mother of all bombs” caved in a mountain in Afghanistan; popularity polls jumped and the Western world applauded.

We’ve been down this road before. Fourteen years ago, a media desperate for readers, a Congress desperate for voters and an administration desperate for approval manipulated the American public’s support for invasion and war. But US policy in Afghanistan and Iraq did not bring security and peace; rather we are the ones who created this current enemy, feeding their hatred and fueling the passion of ideological recruits.

This insatiable thirst for war and a voracious hunger for conquest have nothing to do with honor; this is the deep shame of humanity.

I write this during the Easter season 2017. As this Holy Week began, Christians in Alexandria, Egypt died as they worshiped on Palm Sunday, innocent victims of hatred and hubris.

Christians think a lot about death and violence during Holy Week. Jesus Christ, the center of our faith is – for us – the quintessential innocent victim of humanity’s violence and inhumanity.

Violence is nothing new and I dare say the gore and war of our own day probably pales in comparison to terrors of the past. 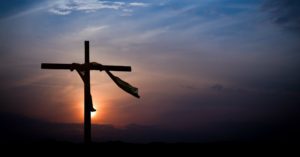 The cross of crucifixion is the primary symbol of Christian faith and we don’t miss the irony. In another day, in another time, the instrument of death may well have been a pyre, a gun, a noose or a gas chamber. Marking any of these as sacred symbols does seem bizarre.

But in the Christian story, Jesus’ fearless, faithful and freely offered baptism into the worst of human violence was the very act that has now begun to unravel death. Easter tells us that – in some overarching divine will – violence and death will not have the final word.

Others besides Jesus have also shown us the way of non-violence. It takes a special kind of courage and strength to look evil in the eye and refuse to stoop to its barbarisms. The violence of war or weapons or words can only destroy; they can never foster peace or hope. These inhumane actions will end up dehumanizing us. Applauding violence will eventually erode the goodness and wisdom that makes us human in the first place; it will make us a bitter, brittle shell.

I am well aware that some people would not characterize Christianity as non-violent. I confess that Christian history is rife with violence in the name of the Christ and some preachers even today have been cheering on the MOAB missile. My friend, Jim Rigby, a progressive pastor here in Texas, posted this to his Facebook page:

“As some pastors celebrate MOAB this Holy Week, I predict they will forget to mention Jesus’s words to Peter in the garden – to put his sword back into his sheath.”

Another example: when the president delivered the commencement address at Liberty University this spring, he was introduced as “the man who bombed those  in the Middle East who were persecuting Christians…” The Christian audience roared and cheered with approval. They literally applauded the violence.

Will we keep on fighting fire with fire, bombs with more bombs? In other words: will we continue to applaud the violence? Will we keep on seeking revenge? An eye for an eye until the whole world is blind?   Or will we eventually find new and different ways to break our destructive, dehumanizing cycles?

Years ago, Albert Einstein‘s brilliance changed the world. His insights allowed us to see new realities and accomplish impossible dreams. What might happen if we listened to him again? 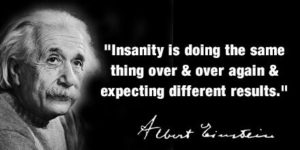 “Insanity is doing the same thing over and over again and expecting different results.”

I wonder if we can ever stop doing the same insane things over and over again.

I wonder if we can reverse the spiral.

I wonder if our warring madness can ever be transformed into peace.

(The above quotes have been widely attributed to Mahatma Gandhi and Albert Einstein.)