But with all this progress, in many other ways our world has gone backwards. The 20th Century was the bloodiest in human history as we created more effective ways to kill and torture one another. Lies and disinformation “travel halfway around the world before truth can get its boots on.” We have generated immense world wealth but the rich keep on getting richer and the poor only get poorer.

President Barack Obama noted these inconsistencies in his recent speech at the celebration of Nelson Mandela’s 100th birth day.

We have to admit that whatever laws may have existed on the books, whatever wonderful pronouncements existed in constitutions, whatever nice words were spoken during these last several decades at international conferences or in the halls of the United Nations, the previous structures of privilege and power and injustice and exploitation never completely went away. They were never fully dislodged.

Caste differences still impact the life chances of people on the Indian subcontinent. Ethnic and religious differences still determine who gets opportunity from the Central Europe to the Gulf. It is a plain fact that racial discrimination still exists in both the United States and South Africa. And it is also a fact that the accumulated disadvantages of years of institutionalized oppression have created yawning disparities in income, and in wealth, and in education, and in health, in personal safety, in access to credit. Women and girls around the world continue to be blocked from positions of power and authority. They continue to be prevented from getting a basic education. They are disproportionately victimized by violence and abuse. They’re still paid less than men for doing the same work. That’s still happening. Economic opportunity – for all the magnificence of the global economy, all the shining skyscrapers that have transformed the landscape around the world – entire neighborhoods, entire cities, entire regions, entire nations have been bypassed. 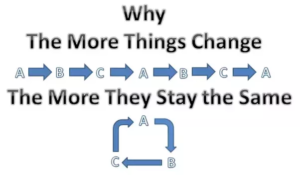 As the world has changed in dramatic ways, human nature has mostly stayed the same. The world continues to change but the basic nature of people – not so much.

There still are (as there have always been) the good, the bad and the ugly. There still are givers and takers, saints and sinners, beauties and beasts. This mixed reality about human beings is nothing new and it shouldn’t surprise us.

But I think it does discourage us. I think many of us still believe humanity should be growing wiser, kinder, more united. This kind of growth toward goodness is what many of us call “progress.”

But evidently too many people still believe human progress should be measured as power and privilege.

Two visions of the world are at work here and these dramatically different understandings have been shaping human history for centuries.

Those of us who live in the Judeo-Christian story listen to the description Mr. Obama offers of the “structures of privilege and power and injustice and exploitation …” and we recognize the world Jesus lived in 2,000 years ago.

The Roman Empire was one of the “great” empires of history. Its roads and architecture still stand as impressive witness to its genius. Its innovations of politics in this ancient republic still influence and inform nations to this day. But, in that society, kindness and compassion and inclusion were considered flaws and weaknesses; they were not virtues and they did not indicate “progress.” In that world, might made right. Privilege meant using and manipulating other people to increase your own advantage. Power was decimating your adversaries.

This is the world to which the Christ came preaching a new vision of “kingdom.” God’s reign as Sovereign Lord, he taught us, brings love and self-sacrifice. In this “kingdom of God,” the last are first, the least are the greatest and the master is servant to all. Privilege brings increased responsibility to care for those who are less privileged. Power is to be used in the service of others.

It’s a really strange vision, when you think about it. Completely counter-intuitive. Even so, from this vision of how the world works, something new has begun among humankind. Something absolutely up-side-down has taken root and is growing in all sorts of unexpected people and places.

What fascinates me these days is that too many people who wear the name of Christ actually seem to live their lives out of the old structures of hierarchical power and personal privilege instead of living the values of the Christ. On the other hand, many people who would never call themselves “Christian” are often those who actually live out his vision of love, compassion and selflessness. 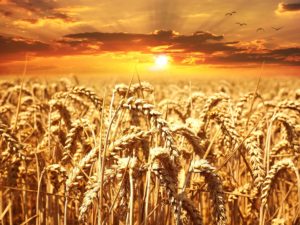 A famous parable Jesus told gives us insight: a farmer sowed his seed and as he sowed, some seed landed in thistle patches, some landed in rocky places, some landed on the beaten down track of the road. Of course the seed could not take root in places like that. BUT much of the seed fell on fertile ground and in its time, the seed produced an abundant crop and a great harvest.

We will probably never be able to change those whose hearts are hard, shallow and unresponsive. So instead of wasting our energy, let’s find those who are open to change, who are weary of the old structures, who are confident that a new day is dawning. Let’s find those partners and keep sowing seeds of love, hope and peace. In its own time, I have to believe this harvest of goodness will dislodge even the most persistent thorny and stony ways of our humanity.

I have to believe that, at some point in our history, the more things change the more they will become new and good and helpful and hopeful.

You may say I’m a dreamer, but I’m not the only one.