There’s a fascinating little story tucked away in the Gospel of John about some accusers who brought a woman to Jesus; a woman “caught in the very act of committing adultery,” they claimed. (No one explained where the offending man was.) Their Law commanded a punishment of stoning, and so they demanded that Jesus weigh in and give his opinion. But he didn’t. Instead, the Bible says, “Jesus bent down and wrote with his finger on the ground.”

His silence must have been maddening. They wanted Jesus’ snap judgment, not his thoughtful reflection. When he was ready to respond, Jesus looked them in the eye and said, “Let anyone among you who is without sin be the first to throw a stone at her” (John 8).

I have a good friend who said something stupid on his personal Facebook page. He himself is not racist but he used a condescending racist slur to describe someone with whom he disagrees politically. It was a careless and thoughtless blunder, a “sin” that brought accusers out of the woodwork, all ready to stone him. Thank goodness he has a strong friends’ group who know him well and believe in him; friends who love him enough to hold him accountable. Thank goodness he is wise enough and humble enough to admit his mistake and work to make amends.

I wish more of my fellow humans loved one another and our society enough to hold each other accountable—not just for careless racist language but for actual racism. I wish more people would step up to confront the myriad ways our nation inflicts very real damage upon our Black and Brown sisters and brothers because of the dark threads of racism woven tightly into our social fabric. It’s so much easier to accuse others than to see our own faults, to condemn others for the speck in their eye rather than doing the hard work of removing the logs that obstruct our own vision (Matthew 7:1–5).

Imagine how much healthier our society would be if more of us held each other accountable to grow beyond the racism upon which our society is built; to engage each other with honest vision, tough love, and muscular mercy so that we can make amends for the harm we all have done (and continue to do) to one another. 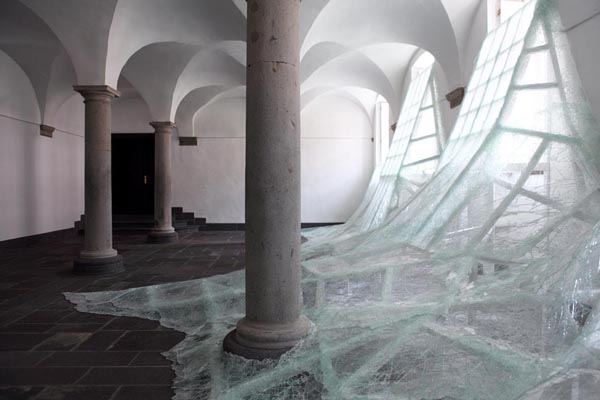 The Gospel of John says that when the accusers heard what Jesus said about casting the first stone, they drifted away one by one, leaving their stones behind. When Jesus revealed to them their own glass houses, they realized that the harm they intended for the woman would damage them as well. They finally were able to see their own sinfulness and to learn something important about judgment and grace, about accusation and accountability.

As for the woman, Jesus held her accountable as well. “Go your way, and from now on do not sin again.” (A good word for all us “sinners.”) There were no more accusations. And no shame. Just a good dose of honest vision, tough love, and muscular mercy that gave her a second chance. That’s good news, a gospel we all would do well to embrace: to speak with our words and to live with our lives.

This essay was submitted to The Paris News as a guest column.

Image credit: The work of artist Baptiste Debombourg’s, Ariel is part of an installation housed in an old German Abbey.

1 thought on “Stones and Glass Houses”