Sometimes I still ask myself how I ended up living in small town Paris Texas; 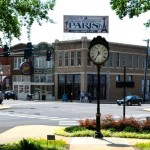 I’m really a big city girl. My children grew up with friends from a rainbow of fascinating ancestries and I love the multicultural mix of people from across the globe who make up the Dallas Metroplex where we lived. As PTA president, my favorite thing was to organize the annual Multicultural Pot Luck Dinner in the school gym.

Paris Texas, on the other hand, is pretty black and white. We do have a Muslim Mayor from Pakistan and quite a few excellent doctors from India and some wonderful people from Latin America with their tasty food and their strong work ethic. But mostly we are Black and White.

The month we made our commitment to leave Dallas and move to Paris, a story hit newspapers across the nation, some as far away as Chicago; a story about the ugly death of a young Black man.

Young Black men die everyday, but maybe this story made headlines because Paris has our own particular ugly history of the lynching of another young Black man at the County Fairgrounds in 1893. It’s not a skeleton in the closet here; people name it and own the stain of it. But I’m not sure if our embarrassing White history has done much to dismantle our ongoing sense of White Privilege.

White Privilege will never “go gentle into that good night.” Many there are who – fearing the death of advantage – resist deeply the inexorable shifts of American culture and they find themselves raging, raging “against the dying of the light.” I remember well the vicious backlash to the Civil Rights Movement, even among the good-hearted church folks of my youth. I remember photographs in the news of faces twisted with hatred. I still see those same kinds of faces all over my newsfeed all these years later. So it doesn’t surprise me that the #BlackLivesMatter Movement has received criticism.

I rode in the back of a pickup truck pulling our NAACP float in the Paris Fourth of July parade. 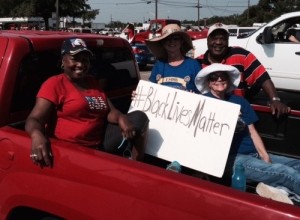 I smiled and waved my American flag along with my hand made “Black Lives Matter” poster. The audience reaction was decidedly mixed. When my arms tired, I handed the sign over to my Black friend but we both realized fairly quickly that there was a clear difference when she held the sign and when I held it. There is something significant about a White woman advocating for her Black sisters and brothers; something important happens. I use my Privilege in the service of others who do not have the unspoken advantages awarded me at birth. To me it’s simply and clearly about truth, justice and the American way.

So when our local newspaper published a bungling critique of the Black Lives Matter effort, calling the movement a hate group and suggesting they are waging a war on cops, I had to respond. I wrote my dutiful letter to the Editor and then shared it with my Facebook friends. That’s when things turned interesting.

My Coffee Party colleague picked up on my letter and blogged about it. I don’t know how he did it, but Egberto Willies found the original column that had been removed from the website of The Paris News. (It must be Egberto’s “We Are the Media” superhuman investigative powers.) Next thing I know, my letter is circulating in all sorts of places in cyberspace. (Imagine my husband’s surprise when he was scrolling through the front page of Daily Kos and my picture popped up on his computer screen. That doesn’t happen very often to a small town blogger.)

Egberto’s point is my own: it does matter when those of us who benefit from White Privilege lend our voices to the wider conversation. It matters to our Black sisters and brothers who oftentimes feel like they struggle alone. And it matters to our White sisters and brothers who oftentimes struggle to understand what all the fuss is about. The world needs to hear us speaking out in a multi-ethnic chorus, singing nature’s music of harmony and unity.

Too many voices are out of tune with this music of the cosmos; some will always be out of tune I fear. But when enough of us join together in the hopeful, faithful symphony; when more and more of us say “Yes! Of course Black Lives Matter,” then our voices can dilute and diminish the disharmony.

Benjamin O’Keefe is the one I heard say that the correct response to the statement “Black Lives Matter” is this: “Yes they do.” 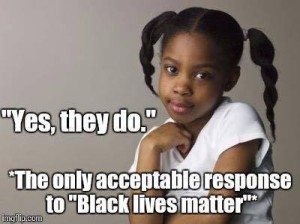 Now let’s all be sure we act like they matter. Let’s challenge our widespread society to act like it as well. And let’s call upon our nation to truly live up to the ideals of truth, justice and the American way.

The fundamental truth that every human is of equal value.

The fundamental justice that offers fair treatment to every one no matter who they are, no matter where they come from.

The American way – celebrating our rich diversity and our multivalent strength.

For what it’s worth, here is Egberto’s opinion piece linked to his website. His blog contains my letter to the Editor of The Paris News if you are interested.

Mine is just one letter, one voice, not particularly profound; it probably won’t change anyone’s mind. But what can change minds and hearts is my voice joined with yours; our voices joined with Egberto Willies and Ruth Self; White and Black and Brown and Red and Blue and Rich and Poor and Gay and Straight and Old and Young voices – all our voices rising together, continuing to sing our various harmonies in this vital public symphony of truth, justice and the American way.

(Egberto met Ruth at the recent NAACP Journey for Justice event in Washington D.C. You have to see this short interview. What a bold, spunky woman!) http://egbertowillies.com/2015/09/17/this-white-womans-comments-made-my-trip-to-this-dc-worthwhile-video/

Footnote on the death of young Brandon McClellan in September 2008: evidence eventually showed he was hit by an unwitting truck driver and dragged for a ways down a dark country road. Charges against his white friends were dismissed. However the climate of suspicion and distrust rocked Paris for months afterwards. Charlotte worked with numerous other passionate Paris citizens in the local Diversity Task Force to help heal some past injustices and to rebuild trust.

4 thoughts on “Truth, Justice and the American Way”