I’ve been registering voters in Texas for years now and I’ve worked hard to explain to voters the challenges of the very strict voter ID laws we have endured here for the past several election cycles.

The IDs that they already have, IDs that work in almost every other situation were not allowed as Texas voter IDs. Citizens who didn’t have a copy of their birth certificate for some reason or another were in a bind trying to get the proper documents. People who live on a shoestring couldn’t afford even the fairly small fee to apply for the approved ID. Quite a few told me they didn’t have transportation or they couldn’t afford to take off work and stand in line at the DPS office.

So you can imagine how pleased and relieved I was when the U.S. 5th Circuit Court of Appeals affirmed earlier court rulings that the 2011 Texas voter ID law does not comply with the Voting Rights Act.

Here in my community, we are gearing up for our get out the vote effort and I’m hopeful this shift will encourage more people to take advantage of our right and privilege to vote. I hope with these obstacles removed, more people will step up to our sacred obligation to participate in our democracy.

While I’m celebrating the numerous court decisions that are striking down voter restrictions and freeing up our freedom to vote, I’m also watching some backlash. In a recent interview with The Washington Post, Donald Trump said:

“If the election is rigged, I would not be surprised. The voter ID situation has turned out to be a very unfair development. We may have people vote 10 times.”

Trump pointed to several court cases nationwide in which restrictive laws requiring voters to show identification have been thrown out. He said those decisions open the door to fraud in November. 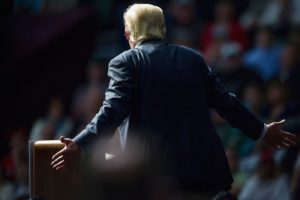 This is an interesting campaign tactic. Of course he is tapping into a long Republican history claiming voter fraud is a significant problem and legislating against this perceived problem.

In his interview with The Post, Trump offered that his chief concern about fraud was that states without strict identification requirements would see rampant repeat voters. “If you don’t have voter ID, you can just keep voting and voting and voting,” he said. On Fox News, Trump’s only evidence for fraud consisted of “precincts where there were practically nobody voting for the Republican” in the 2012 election.

A 2014 study by Justin Levitt, a professor at Loyola Law School, found just 31 possible instances of fraud over 14 years of elections with a total of 1 billion votes cast. 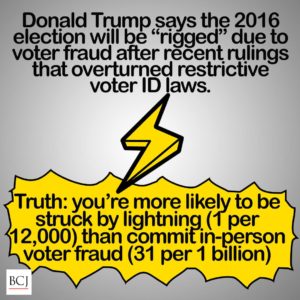 This study concluded that a person is more likely to be struck by lightening than to commit in-person voter fraud.  1 in 12,000 vs. 31 in 1 billion.

I count mail-in ballots  in my little East Texas community and I have to say I’m impressed with the process. From Red to Blue to Purple, from the County Clerk’s office to the local chairs of each party, we work together to make sure every vote counts. Each of us has our own passion about any given election, but I believe most people who step up to do this work, do it with deep integrity.

As with so many other claims Donald Trump makes, his spurious assertions about rampant voter fraud are designed to stir fears and incite alarm. Let’s resist this paranoia and work together to ensure every fellow citizen has an opportunity to vote. This nation will only become stronger and smarter when every voice is heard.

17 thoughts on “Donald Trump is Wrong about Voter Fraud”