The stunning, outrageous assault upon our fellow Americans continues.

This past week, an Oklahoma legislator orchestrated a McCarthyesque hearing at the State Capitol and blatantly proclaimed (without solid evidence) some local Muslim spiritual leaders and respected Islamic advocacy groups to be “terrorists.” He has said before that: “Islam is a cancer that needs to be cut out of the nation.”

Republican Representative John Bennett held an interim study on “Radical Islam, Shariah Law, the Muslim Brotherhood and the radicalization process” in order to offer information that may form the basis of legislation he is considering drafting for the next legislative session. One can imagine what kinds of laws this kind of lawmaker would propose.

Rep. Bennett is absolutely convinced he is a patriot and is working to protect America. The problem is – he is actually working to shred the U.S. Constitution and its guaranteed protections for U.S. citizens. Bennett’s stunning and outrageous ignorance of the religion of Islam and the actual causes of terrorism coupled with the authority of his elected office make him the truly dangerous one within a nation that calls for “liberty and justice for all.”

The meaning of the word “patriot” has been so badly skewed that red flags go up in my mind whenever I hear it these days.

The meaning of the word “Christian” has been similarly misused. As a Christian minister, I cringe whenever public figures use that name in ways completely inconsistent with the Christ whose name we wear. That’s why I was gratified to read the response of an Oklahoma Baptist minister taking Rep. Bennett to task. 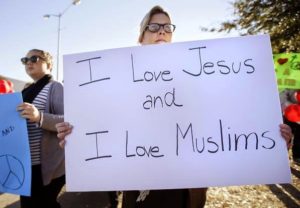 Pastor Mitch Randall’s article is worth reading in its entirety.

As a Christian minister, I find the actions by Bennett and other legislators as egregiously opposed to the Gospel of Jesus Christ…

As a Baptist minister, I am absolutely terrified local magistrates are once again using faith as a tool for persecution and harassment…

As an American, I am appalled at this line of false inquiry and inquisition….

It doesn’t surprise me in the least to learn that Rep. Bennett is running for re-election. This kind of alarmist rhetoric used to stir up emotions and get out the vote; manipulating fear mongering is popular these days. America has enough real enemies; we don’t need to waste our energy conjuring up imaginary ones, especially by turning fellow Americans and friends into invented enemies.

Besides Pastor Randall, it is gratifying to know that quite a few of my fellow clergy colleagues continue to protest these dangerous politicians’ dangerous positions. And it is nice to read Bennett’s Facebook page to see the irate responses of many Oklahoma voters. And it is good to hear that several of Bennett’s fellow Oklahoma Republicans have publicly called out his Islamophobia in the past. 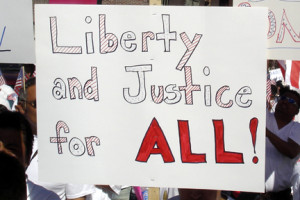 Our combined voice speaking up in protest and speaking out for justice will not be silenced.

I stand with my colleague Pastor Randall and so many other Christians who stand for both the Constitution and the authentic gospel. If I could have written these words first, I would have liked to be so clear and eloquent. I am in full agreement with Mitch Randall as he says:

The charade that took place at the Oklahoma Capitol on Tuesday should make every American’s blood boil.  There is nothing more un-American than elected public officials making unsubstantiated accusations against law abiding and peaceful citizens of a different faith.  This line of inquiry and investigation must cease immediately.  If allowed to continue, the echoes of a new McCarthyism will grow louder over time.

Therefore, as a Christian and Baptist minister, I stand beside my Muslim brothers and sisters because I truly believe this is what Jesus would do.  As an American citizen, I stand beside you because I still believe that the U.S. Constitution is the supreme law of the land for every citizen, not just the powerful elite.  In closing, to my Muslim brothers and sisters, I, for one, do not consider you an enemy, but a friend.

This represents the America I know and love.

This variegated, versatile variety of people is what makes America great.

This is the America which stirs and deserves my patriotism. 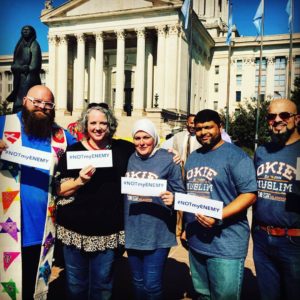 “Team Tulsa at the state house today, joining interfaith colleagues to tell A Certain State Rep (and his colleagues) that #loveislouder, always louder than fear. With my pal Evan and me are Aliye, Kamran A., and the other Kamran A

? – Okie Muslims all, each of whom is brilliant and hilarious and generous and faithful, and absolutely positively #NotMyEnemy.”

Charlotte’s earlier blogs on this subject

This is Outrageous; Loving our Muslim Neighbors

1 thought on “Stunning and Outrageous Ignorance”